It has been reported that Kanye West has split from his Kim Kardashian-esque girlfriend Chaney Jones.

However, it seems that the duo is still going strong.

Love: It has been reported that Kanye West has split from his Kim Kardashian lookalike girlfriend Chaney Jones. However, it seems that the duo is still going strong

Chaney’s video featured photos and videos of her and Kanye laughing and smiling during different dates, dispelling rumors of a breakup.

She captioned it: “Happy Birthday I love youuuuu,” adding a black heart.

Chaney also deleted all but two of her pictures on her Instagram; they don’t follow each other either.

The Page Six source, who is close to Kanye, said their relationship became “choppy” after their trip to Tokyo last month.

Couple: Early Wednesday morning, Chaney, 24, wished the 45-year-old rapper a happy birthday, captioning “I love you” in the video montage

Duo: Chaney’s video included photos and videos of her and Kanye laughing and smiling during different dates, dispelling rumors of a breakup

Love: She captioned it: “Happy Birthday I love you,” and added a black heart

The insider reported that this was due to Kanye’s erratic behavior.

“You know how things are. Tomorrow they might be posted together again,” the source said.

The breakup rumor broke Tuesday, just days after the rapper was pictured in cinemas with a mystery woman who fans believe is glamorous influencer Monica Corgan.

In the report, Kanye and Chaney allegedly ended things after their trip to Japan, but it’s not clear who broke up with whom, TMZ said.

Just a month ago, Chaney showed off a tattoo dedicated to the rapper on her wrist, which reads “Ye,” the name Kanye legally goes by.

Closing: She snuggled up to Kanye in a photo shared in the clip

Turmoil: The Page Six source close to Kanye said their relationship was ‘choppy’ after their trip to Tokyo last month; seen March 12 at the Miami Heat vs. Minnesota Timberwolves game in Miami

Fans started buzzing after the social media model posted a series of snaps of herself to her Instagram page, with her left wrist fully visible.

A closer look: The 24-year-old Instagram influencer has her name “Ye” tattooed on her left wrist

The couple was first spotted together at a party in Malibu, California, while he was still casually dating Uncut Gems actress Julia Fox.

Chaney then stepped out wearing all-black clothing, including a catsuit and knee-high boots that were strikingly similar to what Kanye’s ex-wife Kim, 41, wore.

When it was revealed that Kanye and Julia had split in February, rumors swirled that the rapper had officially moved on with Chaney and was quickly becoming his next muse.

Their romance: The pair were first spotted together at a party in Malibu, California, when he was still casually dating Uncut Gems actress Julia Fox; seen together at the LA Lakers vs. Washington Wizards game in LA on March 11th

In March, Kanye reportedly gifted Chaney a rare $275,000 Birkin bag, something he’s done in the past for both Julia Fox and his ex Kim.

Last week, Kanye was spotted dating at the cinema while watching Top Gun: Maverick with a woman fans claim is influencer Monica Corgan.

Internet sleuths were quick to point out that Kanye’s new date appeared to be Corgan, an Instagram model known for being an ambassador for swimwear brand Boutine LA.

“Forgot to mention… went to @topgunmovie the other night and sat next to @kanyewest,” Motta wrote in the caption for the photo, which shows Ye and his companion closely following the on-screen action.

Monica has 34.6k followers on her Instagram profile and posted a photo of her legs in Balenciaga boots while sitting in a cinema on the day the photo was taken.

He has a type: not much is known about her, except that she is an Instagram model and dresses like Kim

“Cool girl,” she captioned the photo carousel, which she also wore Kim’s favorite brand on, as she posed in a bathroom mirror.

Interestingly, the two seem to have known each other for a while, as Kanye previously mentioned Corgan’s name in a song.

Last year, when West and fellow rapper Drake were falling out, the Canadian star leaked a song by Ye and Andre 3000 called “Life of the Party.”

In the song, Kanye can be heard rapping: ‘So don’t text me like I’m Juanita JCV/ Or more importantly, Monica Corgan who was there for me/ Someone who was truly there for me was rarely for me.

Movie date: Last week, the 45-year-old Donda rapper was spotted attending a screening of Top Gun: Maverick in the presence of a blonde companion 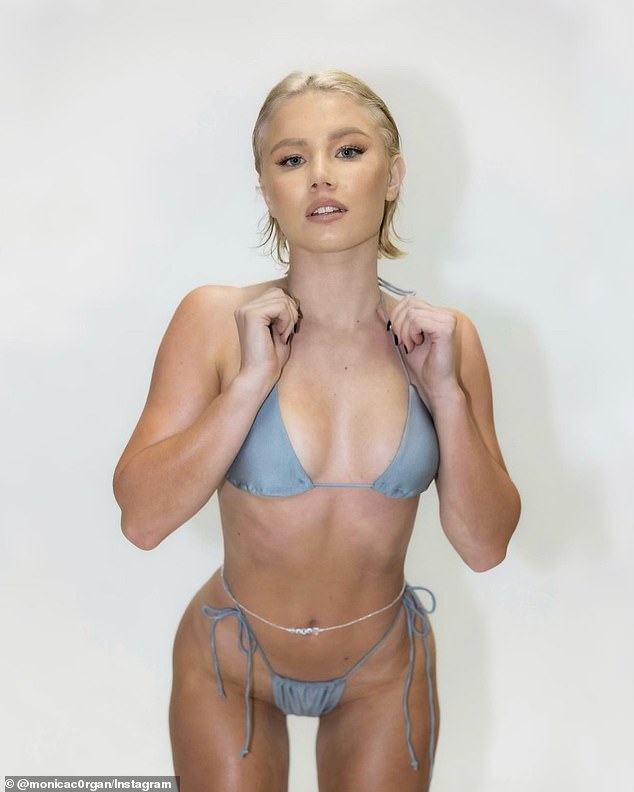 Model looks: Corgan is an Instagram model best known as an ambassador for swimwear and bikini brand Boutine LA

Since splitting from his wife Kim, Kanye has been linked to a number of other women – including model Irina Shayk – although nothing has stayed the distance.

Meanwhile, Kim has entered a new relationship with SNL comedian Pete Davidson, who was recently spotted with Kim and Kanye’s son Saint.

The ex: Kim Kardashian, 41, filed for divorce from the rapper in February 2021 after seven years of marriage; Pictured in 2016

Richard Dean Anderson Is 72 Now & Has To Live Like This